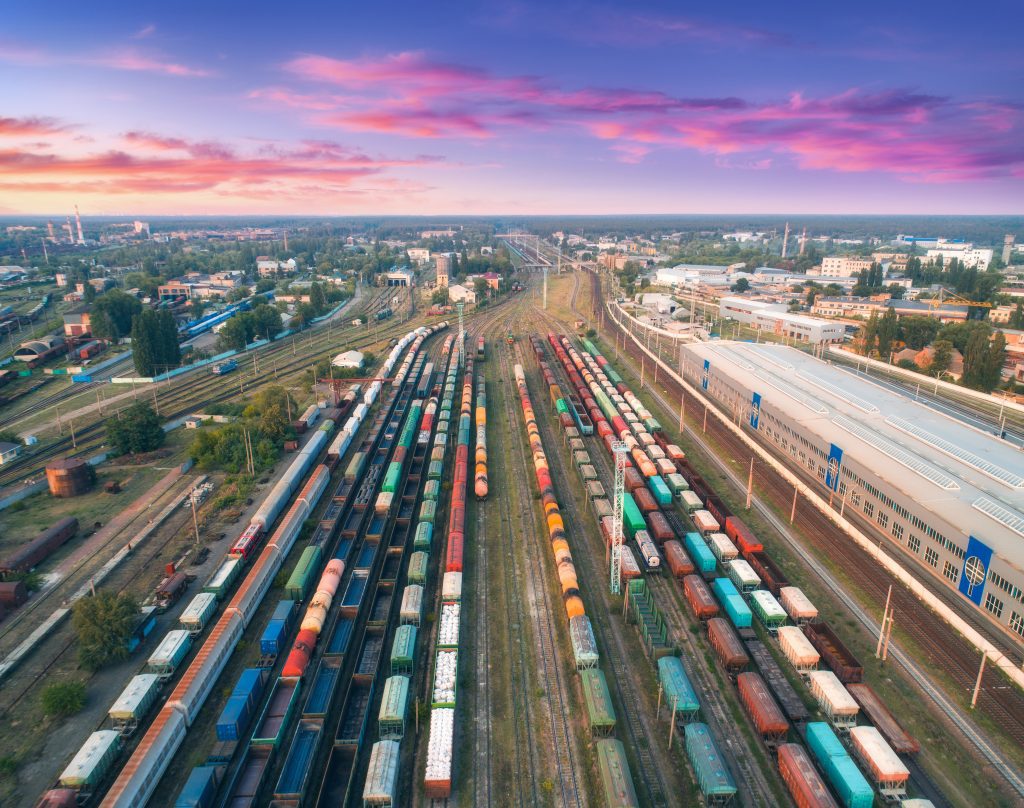 – Dilemma? What dilemma?
Before I answer this question, I would like to illustrate how shunting hills are used.

Shunting hill stations are always large. Why is that?

Shunting on a hill is a highly efficient way of sorting railway wagons, as it uses gravity to move wagons to their target tracks. The installation of hardware and software that enable a safe shunting operation, however, is expensive. To reduce the cost per processed wagon to an acceptable level, a shunting hill operator must process a large number of wagons, typically over a thousand, per day. This number of wagons means a high number of arriving and departing trains, which requires many long tracks and a proportionate number of staff and locomotives to accommodate.

Who owns shunting hill stations and who runs the operations?

In the last century, state rail undertakings, or RUs, were comprehensive organisations. They ran passenger and freight trains and owned the infrastructure, station buildings, and terrains including shunting hill stations with all staff, buildings, hardware and – in a later stage – software. Each of these assets were owned and operated by a single, monopolistic organisation.

At the end of the last century, a split off began. RUs organized themselves in divisions and later transformed those divisions into independent companies for running passenger and/or freight trains and managing the infrastructure, real estate, and other assets to support the railway operations. The infrastructure division/company, Infra Manager (IM), assumed the role of assigning capacity on public infrastructure to stakeholders (e.g., RUs, maintenance and construction companies, etc.) requesting infrastructure capacity.

In this scenario, shunting hill stations were placed under the responsibility of the infrastructure division/company whereas the operations were managed exclusively by the freight division/company. At times, the planning and execution software for the shunting hill [1] was assumed by the infra cell, other times the software by the freight cell. In the latter case, the software was integrated as part of the overall freight ERP-systems.

[1] This is not the software that directly steers the signals, switches and brakes of the shunting hill.

Shunting on a hill is a highly efficient way of sorting railway wagons, as it uses gravity to move wagons to their target tracks.

Who has the need to sort wagons and how do they sort them?

Historically, the former state RUs have this need. They were more or less the monopolist for rail cargo, and single wagon loads formed their backbone in the previous century. These former state RUs have, in cooperation, a very large international network with end point sorting and many hubs spread all over Europe. All these former state RUs have scales for use with shunting hill stations, however, a number of them doubt whether their scale is (still) large enough for use with shunting hills in an economically responsible way. They face a high overall cost to keep their single wagon network up and running. These costs are primarily related to shunting and the first/last mile journeys (i.e., the distance between the first/last shunting hill and the customer terminal). Most of the RUs have since made several efficiency improvements including the closure of smaller shunting hill stations and the severance of smaller branches of the network.

A second group is formed by the newer, private RUs. Most of them started as niche companies to run block trains for one or a few customers with some evolving into more all-round RU with a limited single wagon network or at least some connection with the international network of the former state RUs. These RUs have a certain need to shunt/sort wagons between different trains. They fulfil their needs on other locations then shunting hill stations, in an inefficient way that demands more locomotives and staff effort per shunted wagon.

Lastly, local RUs form the third major group. Local RUs supply the first/last mile in ports areas and large industrial complexes, typically using private infrastructure. These companies receive trains from other RUs and deliver the wagons to the customers within their territory. Depending on the agreement with the delivering RU, incoming trains will arrive with wagons sorted either by destination or in a random order. When all wagons are grouped by delivery point according to delivery sequence, the local RU does not have to shunt in their delivery run. When trains arrive unsorted, the local RU must intensively shunt to sort out wagons. The same is true for departures. Unless the RU can couple the wagons onto a single, outgoing train, they must sort the wagons on a destination/departure train. The local RUs shunt in the same way the newer private RUs do, but local RUs do not have the scale to justify owning a shunting hill.

The trends of the past decades

Due to EU regulations and changing insights on operating models and profit options, the former state RUs are no longer equal partners and have become competitors. In this open market, the RUs, who formerly operated strictly within domestic territory, have spread their wings to cross borders. This is good for the competition and works perfect for block trains. It also makes the situation for the old international single wagon network difficult. The former state RUs try to organize and run their own network across borders too. This poses a situation where they must sort in the neighbourhood of departure/destination areas, also adding other changes in the production processes. They are accustomed to hump-shunting but urge the use of shunting hill stations with a limited volume and as a co-user of the hump yard. On the other hand, the same trend causes a loss of market share in their homeland and gives rise to competitors who take over parts of “their” single wagon loads. This leads to a downturn of their volumes at their homeland shunting hill station(s).

The private RUs that partially evolved into single wagon load network operators look for more efficient shunting and are starting to request access to the shunting hill stations too.

The Local RUs are pushing their long-haul RUs to deliver the trains sorted and accept them unsorted.

The need to allow several RUs to shunt on one shunting-hill vs. the economic and safety hazards of multiple RUs on a single hill.

This is my answer to “What dilemma?”

Here is the dilemma:

Shunting hill stations are public infrastructure, and thus should be accessible for every licenced RU, so the IMs must provide/allocate capacity to shunt on these stations according to the same ruleset as they apply to other infrastructure.
However, allocating capacity to RUs is not enough to make it possible for interested RUs to be able to shunt. Having more than one operating RU at a shunting hill station will create a number of issues leading to safety risks, inefficiencies, extra costs, disputes about used capacity, etc. Some specific issues are related to:

A scenario with a single shared application and one pool of locomotives involved RUs is not a viable option, yet letting all of the RUs use their own applications and locomotive(s) is not a realistic option in terms of cost aspects and safety.

When more than one RU is active at the same time on the hill-shunting installation, safe and efficient allocation of tracks and hill-top slots is near impossible. Allocating the RUs in sequence with time blocks where only one RU is operating on the station is an impractical option against the needs of the individual RUs in relation to the arrival and departure of their trains and efficient resource use.

The IM has to do more than allocate capacity – the IM’s core task in this topic. A key part of the solution is for the IM to be the lead stakeholder for prerequisites related to a fair share of capacity and the economic use of the installation. The IM must, at least:

There are three realistic options to solve the shunting hill dilemma

In this perspective, there are three realistic options:

For all three options, the IM at least must promote or (co-)implement software in which the shunting company can plan and execute its operations. This application must have:

This application should not be an integrated part of any ERP-system of any RU of option 1 as that would give way conflicts of interest.

Ab Ovo recognises that in major ports in Europe IMs, RUs, and port authorities already have considered this challenge and are thinking about or even working on a solution. For some of these cases, Ab Ovo is involved in these processes as supplier of knowledge and solutions.

With more than 40 years of experience in logistics of which almost 30 years rail related, Jan Peeters is a most senior Business consultant in Ab Ovo. As Business Consultant he discusses the needs and wishes of rail companies and designs together with them the best fitting solutions. During his carrier he worked in different roles within large organizations like Royal Netherlands Airforce, NS Cargo (today DB Cargo NL) and Maersk Logistics.