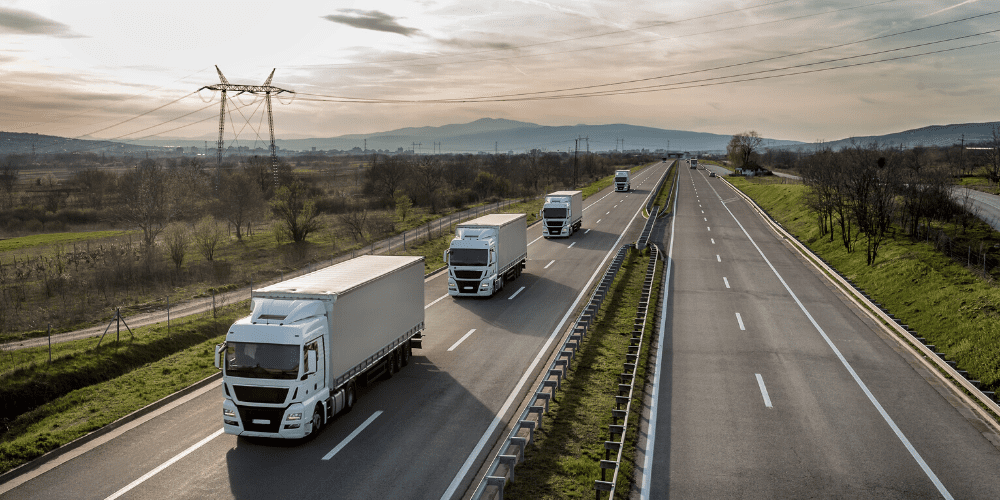 Rising fuel prices, a three letter phrase that has by now become a common topic of conversation is something which we cannot deny it directly influences all of us. It not only affects the transport costs, but also the product costs and therewith the profit of a logistics company. Unfortunately, there is a limit on the amount of vehicle fuel reduction through route optimization.

Nevertheless, transport companies are pushing to reduce their emissions due to the emission policies set over the last years. About 80% of the total global warming potential of all greenhouse gases is caused by carbon dioxide (CO2) and a quarter of the transport emissions are caused by road freight transport. In 2019 the EU decided that the emissions for all heavy-duty vehicles should be reduced with 30% by 2030, which is in line with the Paris Agreement.

However, with the ever increasing amount of transport services, this is not achievable by simply driving less. Luckily, there have been several studies over the past years which explored various concepts that could potentially reduce these emissions from road transport. A concept that stands out from these topics is called Platooning, could this be our answer to the emission goals?

Transport companies are pushed to reduce their emissions because of the new emission restrictions set over the last years.

Wat is platooning in the logistics sector?

Platooning is a way of driving a group of trucks together behind each other within close distance where the leading truck controls the speed. There are two types of platoons which distinguish themselves in the way in which they are steered. The first platoon type consists of electronically connected trucks, which means that it is not manned but will automatically adapt to the behavior of the front truck. The second type is a platoon that consists of trucks that are all manually driven by drivers.

Platooning aims to increase the capacity of a road by having trucks ride directly behind each other which in turn also decreases the amount of aerodynamic drag (or air resistance) that following trucks experience. This is possible due to the slipstream created by leading in which the following trucks drive in. Consequently, this reduces the resistance against trucks which in turn reduces the energy required to move a truck on a highway thus allowing for greater fuel savings.

This all might sound complicated, but (as the Dutch would say) it is just like riding a bike. You might have already seen this concept in bike races like the Tour de France. One of the reasons why they ride so closely behind others is because it reduces the air resistance, which saves them a lot of energy. You might even have experienced this yourself when biking or might want to try it out the next time you step on a bike. Next to this, in racing sports, driving in a slipstream gives a driver an advantage in taking over a leading vehicle. Altogether, this shows how much success this concept already has in different areas, so why not use this for road freight as well?

What are the benefits of platooning?

There are several benefits that can be gained by means of platooning, namely economic and social benefits. The economic benefit derives from the reduction in fuel consumption and can be gained from platooning but depend on four important factors:

1. Vehicle speed has a great influence on the magnitude achieved by platooning. According to recent studies, platooning can reach a fuel reduction of 21% at a speed of 80km/h and 16% at speed of 60km/h on highways (Bonnet & Fritz, 2000). In general, it holds that the faster you drive, the higher the air resistance will be, and therefore the more fuel you can save by means of platooning.

3. The position of the truck in the platoon matters. A truck that is driving behind another truck will definitely experience the benefits of platooning. However, even the front truck appears to experience a small fuel reduction of around 4% (Bonnet & Fritz, 2000). But there are still on-going studies on the influence of vehicle position in a platoon, especially for platoons of three trucks and more.

The type of roads on which these platoons are used. On highways the benefits are greatest as the speed is higher, which increases the potential as discussed before. Next to this, the trucks can drive in platoon formation for a longer time as these roads are much longer than normal roads. On short roads, the time it takes to form platoons and the extra energy it takes to catch up with a platoon may outweigh the benefits generated by the platoon.

Now, the social benefits from platooning can be divided into two aspects:

1. It can lead to (more) optimal road utilization. The trucks will always drive behind each other when driving in a platoon which would reduce the amount of overtaking trucks, a common source of highway congestion. This will result increase the flow of vehicles on highways and decrease speed variability.

2. Electronically connected trucks will allow for shorter inter-vehicle distance to a shorter required response time of electronic systems. This will also increase safety by means of fewer human errors.

Of course, there is also a downside to platooning. The main one is that it will require an investment into a larger and newer fleet as waiting for these platoons to form takes time. This holds for businesses with tight time windows, as extra trucks might be necessary to make sure that all deliveries are still delivered on time. However, in the long term the fuel savings will still be much higher than this investment, especially with the current fuel prices. Here it also differs whether electronic or manned trucks are used, as the latter are currently much cheaper.

In the long term the fuel savings will still be much higher than an investment in a larger and newer fleet, especially with the current fuel prices.

How to form these platoons?

There are two ways to form platoons, you can either form them along the road by means of adjusting the speed or you can form them at fixed points, such as at terminals, depots, or warehouses.

Let us start with the first strategy. The formation of platoons along the roads is a more dynamic way and therefore a more difficult approach. For now, this approach is only efficient on highways. It takes time to form these platoons, because a truck needs to get close to the platoon driving in front or behind it. On short roads the truck will simply not have the time to increase or decrease its speed to catch up with the platoon. Besides that, by the time it joins the platoon it will likely need to leave the platoon shortly after. Therefore, highway roads are preferred such that trucks have the time to drive achieve the benefits of platooning. Also this strategy only works on highways is that increasing your speed and braking will increase the fuel consumption. On highways the fuel savings generated by platooning will outweigh this extra fuel consumption.

Aside from previous statements, this strategy is quite difficult to perform as many decisions must be done:

The second strategy is therefore a more accessible approach. Forming platoons at fixed points means that the trucks drive together the entire way from A to B and therewith fully utilize the potential generated by platooning. This strategy is also easier to translate into a planning decision and can be added as a constraint to the planning puzzle. This does, however, increase the complexity of the planning puzzle significantly if you want to go for the optimal solution. This can be solved by making planning decisions beforehand related to the formation of the platoons. Below a few examples of platoon formation approaches are described.

The first possibility is to let platoons always drive together in a fixed group of a certain number of trucks, meaning they drive the entire way together. Once they have finished their assignment they will drive together again to their next destination. This can be interesting if there are always batches (groups) of cargo that need to be transported to different destinations.

A second approach is to set a fixed waiting time or a fixed number of trucks, such that the platoon is allowed to leave once this number is reached. Say we assume that the first truck may wait at most 20 minutes or may consist of at most four trucks. Once these 20 minutes are over or if the platoon length has reached size four, then it may leave with the trucks that were able to join in that time.

The best parameter values for that number of trucks in the platoon or the maximum waiting time can be determined in advance by means of parameter tuning. Afterall, the potential of platooning depends on the platoon formation strategy that fits your type of business best, on the goals that you want to reach by means of platooning, and the investments that you are willing to make.

The potential of platooning depends on the platoon formation strategy that fits your type of business best, on the goals that you want to reach by means of platooning, and the investments that you are willing to make.

How can SmartRouting help with planning platoons?

Adding platooning rules to your planning puzzle can get extraordinarily complex and difficult to solve with just a human brain. As stated before, the implementation of platooning is very customer dependent, thus currently not part of SmartRouting. However, a planning solution is necessary to solve these kinds of problems and this is where SmartRouting can come in handy. Platoon formation decisions can easily be implemented due to the customizable character of SmartRouting. This way, it can help your planners to make your transport even more sustainable.

Delaja Post completed her MSc in Quantitative Logistics and Operations Research at Erasmus University Rotterdam in November 2021. During her studies she gained experience in the maritime industry and wrote her thesis regarding the potential of platooning in a port area. Delaja has been working for Ab Ovo as a Quintiq Software Expert for almost a year and has gained valuable experience in building tools for complex planning puzzles on several projects.